I hope you are all well. It is painfully hot and humid in Nashville, but the garden has been planted…at least what we are doing this year. When the ice storm(s) hit, we lost all of the netting due to the weight, and some structural damage was done to the framing, so the birds have had a nice Spring with all of the strawberries, raspberries and blackberries. Full steam ahead next year.

I have been quite busy teaching guitar, writing with Amanda (www.amandabroadway.com) and playing shows with her and subbing on guitar with The Music City Toppers (www.facebook.com/TheMusicCityToppers). They are a really cool band you need to check out when you come to town. The Toppers Play every Thursday, downtown Nashville, at ACME Feed & Seed (www.theacmenashville.com ). One of the singers in the Toppers is named Alicia Michilli (www.aliciamichilli.com.) She is a tremendous singer, has just released a new EP and is a very genuine person. You really need to check her out. 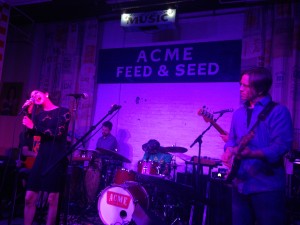 I have a cool picture of us playing a song at a Toppers show, “I’d Rather Go Blind” by Etta James. Little did I know, a week later, she would be singing on “America’s Got Talent.” (www.youtube.com/watch?v=UBodGQpaG8Y.)  We also did a really fun Beatles night with several other artists and bands at Mercy Lounge.

Amanda will be playing a festival out in Moscow, Idaho the end of July. She is flying the whole band out (11 of us), and I will keep you posted. Also, Amanda and I have been playing a new song live with the band, and have a few more in the works. I will share some video/audio asap!

I am also writing material of a new album as well. I have a TON of ideas and half-finished ideas to sift through…scraps of paper, full notebooks stacked in the corner, memos on my phone, demos in Logic on the computer and many files staring at me in my hard drive. I think what is emerging is an acoustic record and also a full band rock n roll record. there is a lot of stuff to wrap up, and I am feeling energized and excited. I will post some of the process and rough tunes soon!

Also, I will be soon be releasing a series of videos for guitar instruction as well for my teaching studio, www.greenhillsguitarstudio.com.

Ok, start a compost pile, plan a garden, have a great 4th of July, travel safely and go experience some live music!!

All The Best,
Shane